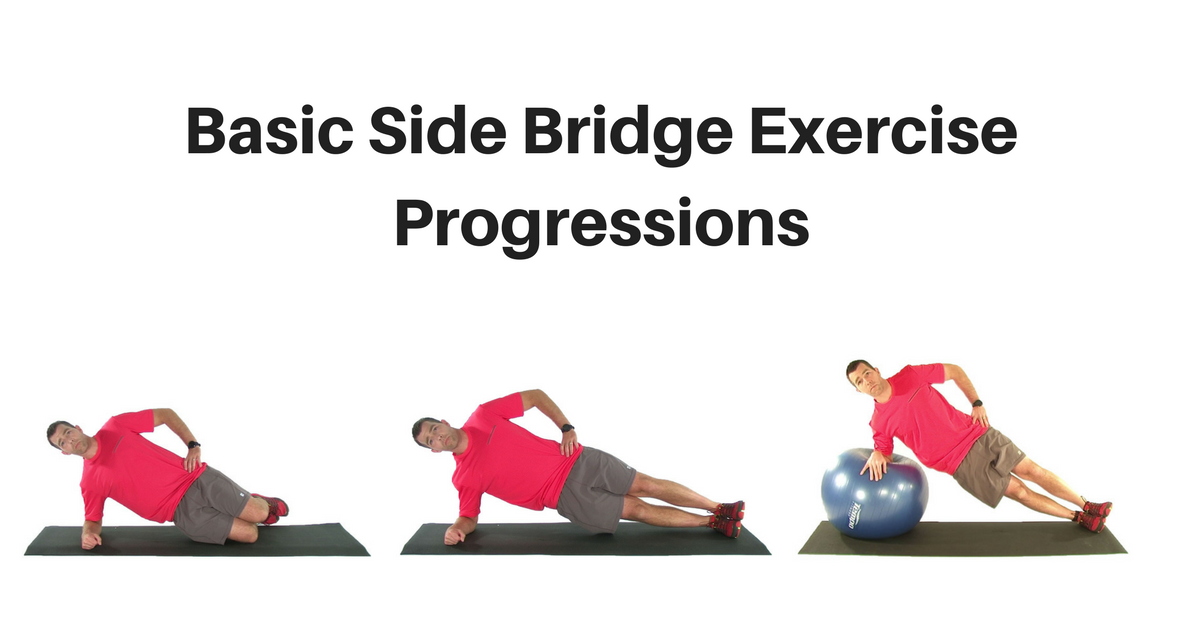 The Side Bridge exercise is one of the most important exercises for lower back rehab. It is part of what Professor McGill, a world authority on spine biomechanics from the University of Waterloo, refers to as the “big three”. A set of three exercises he recommends in the early stages of low back rehabilitation.  The other exercises in the big three include the Curl-Up and Bird-Dog exercises.

The Side Bridge is critical to low back stability for two reasons.

First, it targets the often overlooked quadratus lumborm muscle (QL), a lateral trunk muscle that runs from the iliac crest to the lower ribs with it’s fibers cross-linking the vertebrae. Most stability exercises focus on the trunk extensors  and the abdominals. But McGill and his colleagues have also shown the quadratus lumborum (QL) to play a critical role in lumbar stability (1).

Second, the EMG profile of the side bridge demonstrates a high ratio of muscle activation to spine load. As discussed by McGill in his classic text, the architecture of the trunk muscles are such that muscle contraction is also associated with spine compression (1). More muscle contraction creates greater compression.

Under normal circumstances this compression can help to stabilize the lower back. However, with an injured spine higher levels of compression can create further damage and impede healing. This needs to be considered when prescribing exercises for the low back pain patient. Especially in the early stages of acute low back pain.

McGill’s recommendation of the “big three” is largely based on the fact that the included exercises tend to isolate certain muscles (or are at least biased towards certain muscles or muscle groups). As described above, the side bridge isolates the lateral trunk muscles. But is also minimizes activation of the rectus abdominus and spine extensors. This relative isolation allows an adequate training effect on the lateral trunk muscles while minimizing the overall spine load.

The Basic Side Bridge Exercise Progression

As with most initial lumbar stability exercises, the premise is to place the spine in a neutral position and then add a load. We are trying to train the muscles to resist the forces that act to pull the spine out of alignment. With the basic Side Bridge exercises this load is supplied by gravity. As strength and skill improve incorporating limb movements and additional balance challenges can also be used to progress the load and stimulate further adaptation (see my article, Advanced Side Bridge Exercises). Side Bridge From Knees

The potential issue with this exercise is that knee flexion will tend to pull the pelvis into an anterior tilt due to the attachment of the rectus femoris muscle. To prevent this it is important to incorporate a slight posterior pelvic tilt into the exercise and to perform an abdominal brace to set and hold a neutral lumbar posture during the exercise. The classic Side Bridge exercise is similar to that performed from the knees, but now the legs are fully extended.  This is much more challenging than the previous exercise. The rectus femoris is in a more slackened position, so unless the single joint hip flexors are tight there is no need to to perform a posterior pelvic tilt. But an abdominal brace should still be performed. When the patient is competent in the basic Side Bridge, the Side Bridge Roll becomes a valuable option. This will help train the ability to hold the lumbar spine stable during twisting or rotational tasks. The key element with this exercise is to keep the hips and shoulders locked in the same plane so as not to allow any rotation of the lumbar spine. Side Bridge on Stability Ball

Incorporating labile surfaces can be a useful way to facilitae the balance / sensorimotor system into traing. This can help improve efficiency and timing, helping to train the stabilizing musculature to respond more effectivley to unexpected loads or balance challanges.

Adding labile surfaces has also been shown to increase the level of muscular contraction. This can be a positive thing, assuming the tissues of the lower back are healthy enough for this increased load. But be careful adding labile surfaces too early in the treatment plan.

From time to time we come across patients whose shoulders are so shot and painful that they cannot support the weight of the upper body. For these patients the traditional Side Bridge exercise is not an option.  But we can still train the lateral trunk muscles with a Modified Side Bridge that takes the shoulders out of play

For the Modified Side Bridge begin in a side-lying position with the knees straight and thighs in line with the upper body. Hike the upper hip up towards the rig cage. This will lift the legs off the floor. As a side note, significantly deconditioned patients may need to begin by simply trying to take some of the weight off the legs and progress to an actual lift as strength improves.